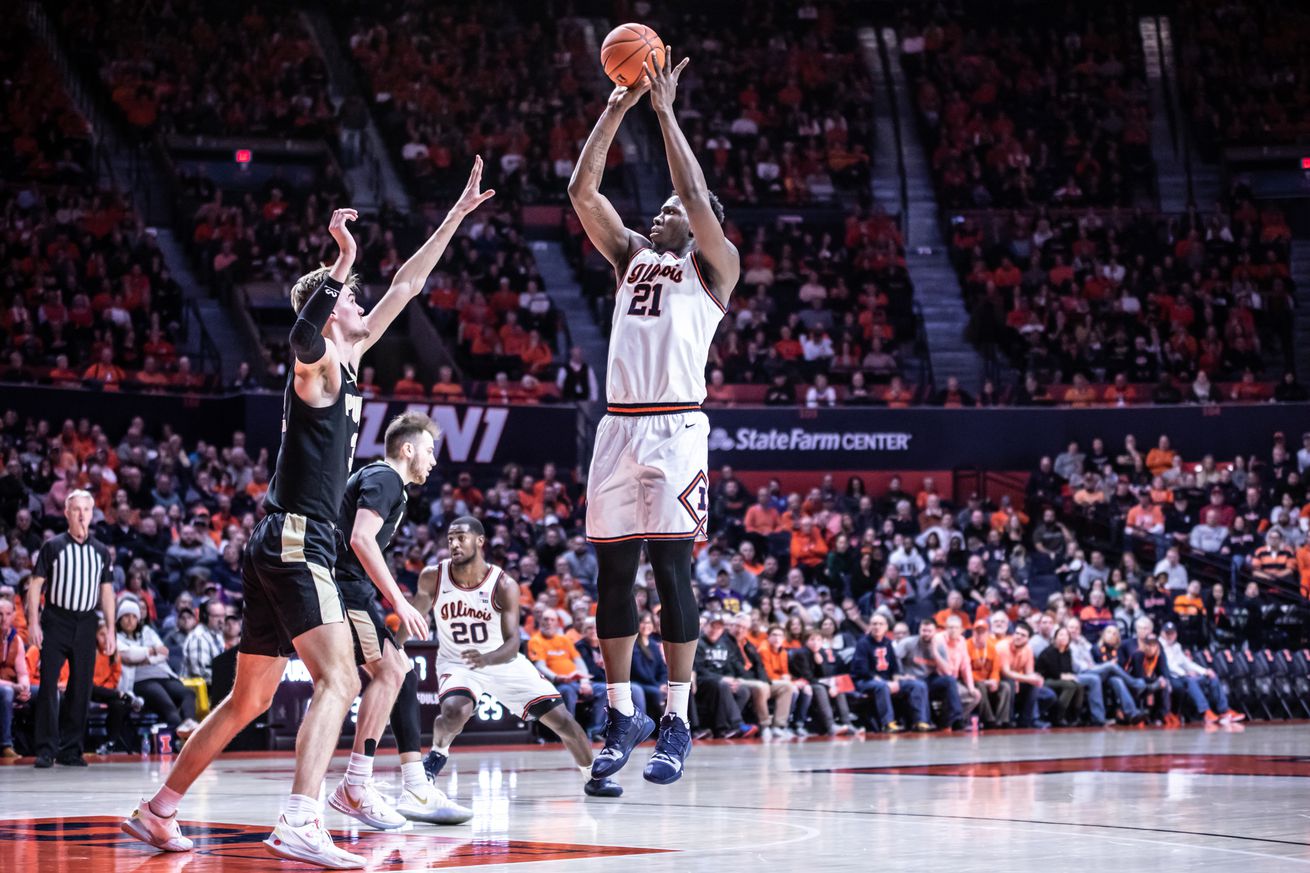 Talk about a statement from Illinois’ defense.

CHAMPAIGN, Ill. — There’s shutting down your opponent, and then there’s what Illinois did to Purdue on Sunday night.

The Illini (10-5, 2-2) knocked off the Purdue Boilermakers in a historic conference matchup at State Farm Center in Champaign, 63-37, the lowest point total in Purdue program history.

“We always take the defensive side personally,” said junior Trent Frazier. “Tonight was our best night, but we have to bring that same energy every night.”

With dreams of dancing in March seemingly starting to slip away after a disappointing loss at Michigan State on Thursday, Illinois held the Boilermakers (9-6, 2-2) to just 25% shooting from the field, their lowest percentage in school history. Nothing in the conference is guaranteed. Just ask No. 5 Ohio State, which lost on its home floor to Illinois’ next opponent (Wisconsin) last Friday night.

“Very proud of this group,” said Illinois head coach Brad Underwood. “We didn’t show our team one clip from Michigan State. We moved on and didn’t want to dwell on the fact that we had a bad shooting night.”

You couldn’t have drawn up a better start for Illinois… or a worse start for the Boilermakers. Thanks to some stifling Illini defense, the Boilermakers didn’t get on the scoreboard until a Matt Haarms free throw at the 13:10 mark — part of an 0-for-10 start from the field.

“Purdue had a night like we had against MSU,” Underwood said. “I do think our defense had something to do with it. I thought our focus was excellent tonight.”

Meanwhile, Illinois went back to its bread and butter and pounded the ball inside. The Illini dominated the battle for the boards (22-16), second chance points (11-0), and points in the paint (16-6). Freshman big man Kofi Cockburn led all scorers with 10 points on 5-of-8 shooting, and sharpshooting Alan Griffin continued to be a spark off the bench, pulling down three early offensive rebounds, while adding a putback and a corner three. Top to bottom, it may have been the best looking half of the season as Illinois took a 32-19 lead into the locker room.

“Alan Griffin’s motor and energy that he creates coming off the bench is phenomenal,” Underwood said. “He plays so hard. He’s doing an elite job of running the floor.”

The second half opened up much slower for both teams, but especially the Illini. Purdue made it a point of emphasis at half to reestablish its inside game, both offensively and defensively. Baskets were harder to come by for the Illini bigs, who combined for just eight second-half points, but they were harder to come by for the Boilermakers. Purdue trimmed the Illinois lead down to seven, but a costly 5:11 scoring drought midway through the second period allowed Illinois to mount a 20-point advantage. The Illini held Purdue to just 15-of-60 shooting from the floor as they pulled away, 63-37.

“We weren’t tough enough to step up and make shots on the road the other night,” Frazier said. “Tonight, we had a bunch of guys make shots and we were dialed in on the scouting report.”

“This league is unparalleled in terms of attendance and attention. There’s a different feel and a different vibe… Pretty much every year it’s hard to win on the road.” — Brad Underwood

YOU GOTTA SEE THIS

Watch out for the trailer!

this is your pilot speaking. The seatbelt sign has been turned off and you are once again free to move about the cabin. Thank you for flying TCR.

Tipoff is set for 8 p.m. CT on Big Ten Network.